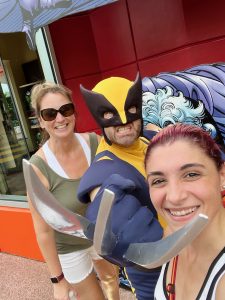 The Calm Before the Storm at Islands of Adventure

I just returned from a 13-day family vacation to Orlando, Florida. Our first stop was the Universal Orlando Resort. Universal knows how important a vacation is. And while they guarantee an incredible vacation experience, they unfortunately cannot make any guarantees about the weather.

Three days before we were scheduled to arrive at Universal, so was Hurricane Ian. At the time – the National Hurricane Center predicted Ian would take a path on the west coast of the state, resulting in only the outer bands of the storm reaching the central Florida area. Orlando is located 40 miles from the Atlantic coast, which means it is rare that the area is severely impacted by hurricanes. In fact, Orlando’s inland location makes it a primary destination for those who are seeking shelter from an approaching storm. Simply put, Orlando is the safest place to be during a hurricane in Florida.

We arrived at Lowes Sapphire Falls at the Universal Orlando Resort on Monday, September 26th. We enjoyed CityWalk that evening and on Tuesday, headed to Islands of Adventure. While in line for VelociCoaster, we learned that Hurricane Ian had taken a turn and the storm was now on route to hit Orlando directly. I knew from years of dealing with Florida theme parks and hurricanes that chances are the parks would close. So, we attempted to take in as much as we could and headed over to Universal Studios. Sure enough, at 4:45pm, while waiting to watch the Jason Bourne Stuntacular, I received notice that due to the approaching hurricane, both Universal theme parks and City Walk would be closed on Wednesday, September 28th and Thursday, September 29th. 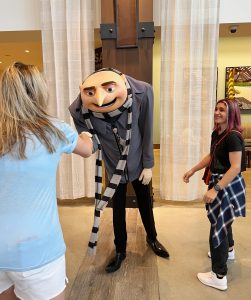 Meeting Gru in the Lobby at Sapphire Falls

We were only staying at Universal until Thursday, so we knew that our time at Universal was over. But not before we squeezed in a fantastic dinner at The Toothsome Chocolate Factory and picked up pizza from Red Oven Bakery to enjoy back at our hotel.

Lowes Sapphire Falls is a large, high rise style hotel.  It offers a full-service restaurant, a quick service dining location with grab and go items that serves Starbucks coffee, a bar, and a Universal Studio store. It has floor to ceiling windows in the rooms and throughout the lobby and hallways. Allowing us to watch the storm’s wrath, all the while remaining safe and dry inside.

On Wednesday morning, I received word that Walt Disney World (where we scheduled to move to the following day) was not allowing any check ins on Thursday. After having a mini heart attack, I visited the front desk at Sapphire Falls. The Team Member (Universal lingo for employee) not only extended our stay until Friday without issue – but to make things even easier – let us remain in the same room. 10 points for Gryffindor! 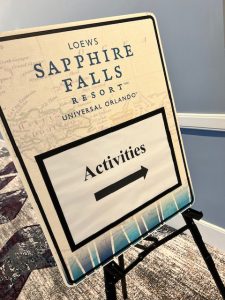 I learned then that Team Members work during the storm on a volunteer basis. In an exchange for volunteering, Universal puts them and their family up at the hotel. The same Team Members were with us for the full 48 hours. And they couldn’t possibly be more kind or helpful. Especially when considering they left their homes behind and won’t know how the hurricane will have affected their dwellings until it’s all over. Their kindness was in a word; infectious. Absolutely every single Guest we encountered was just as courteous, kind and patient.

As far as hunkering down for a hurricane goes, we could not have been in a better place to do so. Over the following two days, there were always Universal characters in the lobby, children’s activities, board games, movies to enjoy and more for Guest use in the board rooms. We used the fitness centre, took pictures with Gru, watched Jurassic World, souvenir shopped, ate, drank, and met SO many wonderful people (and their dogs)! 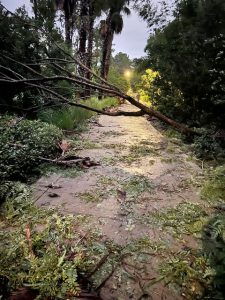 Downed Trees and Debris Along the Path to CityWalk

On Thursday morning, clean-up crews began clearing knocked over palm trees, debris from walkways, the pools and more. From our hotel room, we could see a hole that Ian ripped out on the side of the building that houses Jurassic Park River Adventure. I also read that a portion of The Incredible Hulk Coaster was under water. Later that evening, we attempted to take the walkway from our resort to City Walk. But we were quickly turned around by flooding, downed trees and more. It was then that I realized that the parks were closed in advance for two days: one for the actual storm and the second for clean-up. Then – depending on the amount of any damage – parks open back up the following day.

Throughout it all, we really enjoyed our time at Universal and Sapphire Falls. Without the parks closing, we would have never discovered the fantastic Strong Water Tavern, which turned out to be our favourite dining experience of the vacation. And I thought we would all be sick of Sapphire Falls come Friday morning – but to the contrary – we all agreed that we can’t wait to go back. Only this time, we’d prefer to spend more time at the Universal theme parks and only use the hotel to sleep and change. 🙂 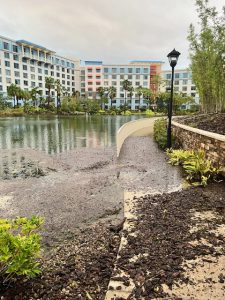 Flooding Along the Path to CityWalk

It was upsetting to see the destruction Ian left behind – knowing that as awful at it was – what we saw wasn’t anywhere near comparable to the damage Hurricane Ian caused elsewhere. If you are resident or visitor of a coastal town and need to escape the path of a hurricane, I highly recommend heading to the Universal Orlando Resort to do so.

A massive thank you to Universal Orlando and the Team Members at Sapphire Falls. We will be forever grateful for the hospitality and kindness that they bestowed upon us.

Hurricanes are natural disasters that form over open water primarily between the months of June and November. Hurricane Ian was a large and destructive Category 4 Atlantic hurricane. Ian caused widespread damage across western Cuba and the southeast United States, especially in Florida and South Carolina. It was the third-deadliest storm to hit the U.S. mainland this century behind Hurricane Katrina and Hurricane Sandy.

You can help people affected by Hurricane Ian by donating to Redcross here:
https://www.redcross.org/donate/hurricane-ian-donations.html/