The Castle on the Sea – The Disney Wish!

The Castle on the Sea – The Disney Wish! 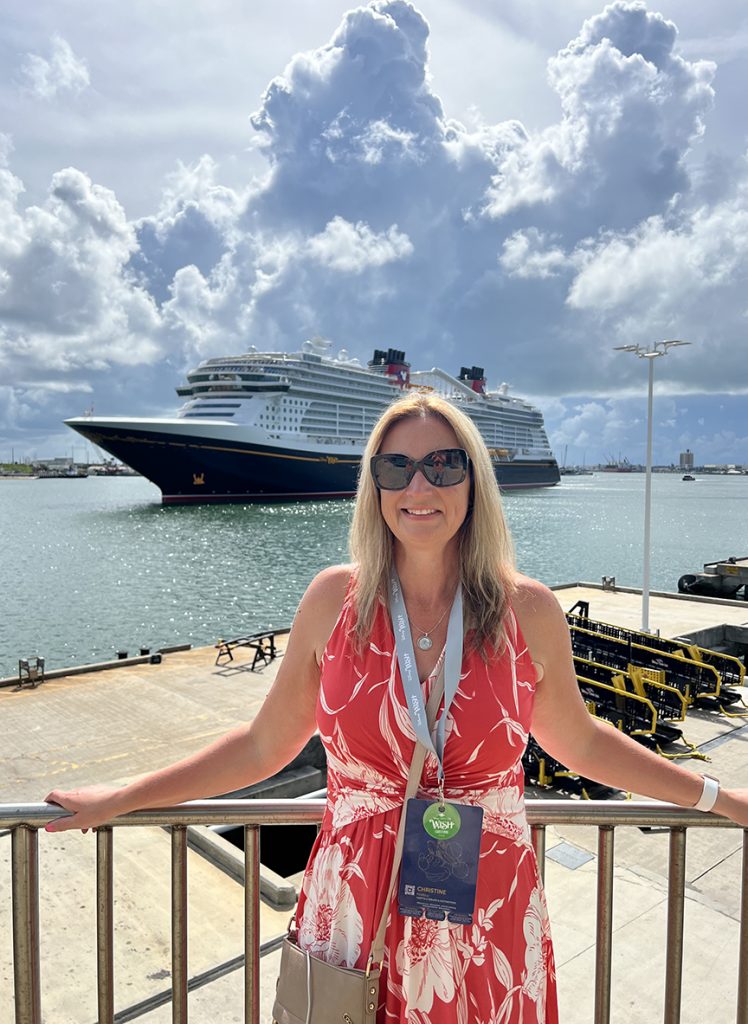 Following a six-month delay due to COVID, the newest vessel in the Disney Cruise Line fleet; The Disney Wish finally set sail on its Christening Cruise from Port Canaveral, Florida.  Of all the fantastic things I was looking forward to experiencing during the world’s return to normal, The Disney Wish was at the top of my list.  Not only am I an avid Disney Cruiser (admittedly, I prefer a Disney Cruise vacation to a Disney theme park one), but hello?  BRAND SPANKING NEW DISNEY SHIP!  Need I say more?

Upon first spotting The Disney Wish off in the distance when approaching Port Canaveral, I could already see that she was in a word; magnificent.  Not only was she massive, but the classic red and yellow Mickey colours tied into the elegance of ocean liners of the past…The Disney Wish is absolutely BEAUTIFUL! 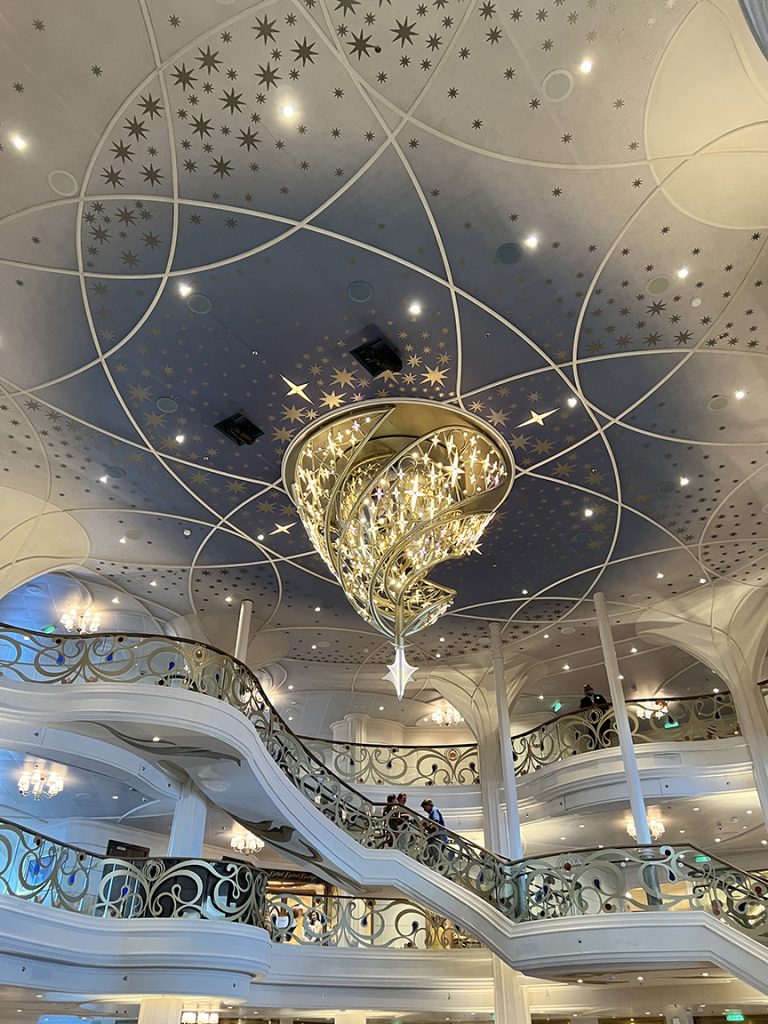 The wonder and enchantment of this new vessel begins the moment you step on-board.  The atrium is as classy and inviting as the famous ‘meet me at the clock’ staircase from Titanic.  A statue of Cinderella sits front and centre here – just as she should – after all a dream is a wish your heart makes.  To compliment Cindy, blue, white and gold is woven throughout the floor and walls.

The staterooms are sleek and eloquent.  They feature hints of various Disney leading ladies, depending on which deck your stateroom is located on.   We were on deck 10 and ours featured everyone’s favourite Little Mermaid.  From flat screen TVs to a glass shower door, these staterooms are Disney’s finest on the seas. 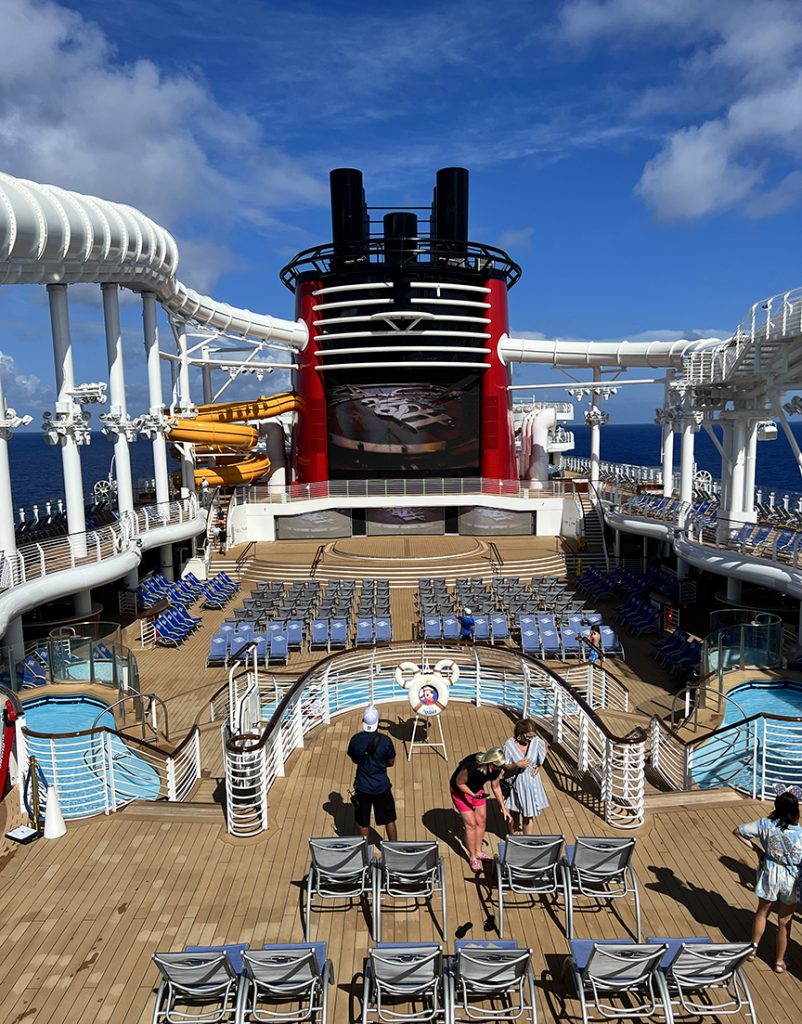 The Disney Wish offers a LOT more elbow room at the pool and recreational decks.  Finally, Disney has made is so that those ‘relaxing days at sea’ will be just that, oppose to stalking another Guest for their deck chair.  The highlight here is the AquaMouse, which is a water slide ride combined with audio and visuals, making it the very first attraction at sea.  While lots of fun, it is temperamental.  So be sure to experience AquaMouse as soon as you can to avoid disappointment.  Little ones have an adorable Toy Story themed splash area, families have their choice of six pools and the adults only area features a hot tub and an infinity pool located at the aft of the ship.

I was disappointed that there wasn’t more shade to be found in the pool areas.  So be sure to pack your sunscreen.  I also wish that the adult pool was larger, easier to get in and out of and that it wasn’t such a long walk in the sun to get to or to grab some grub from. 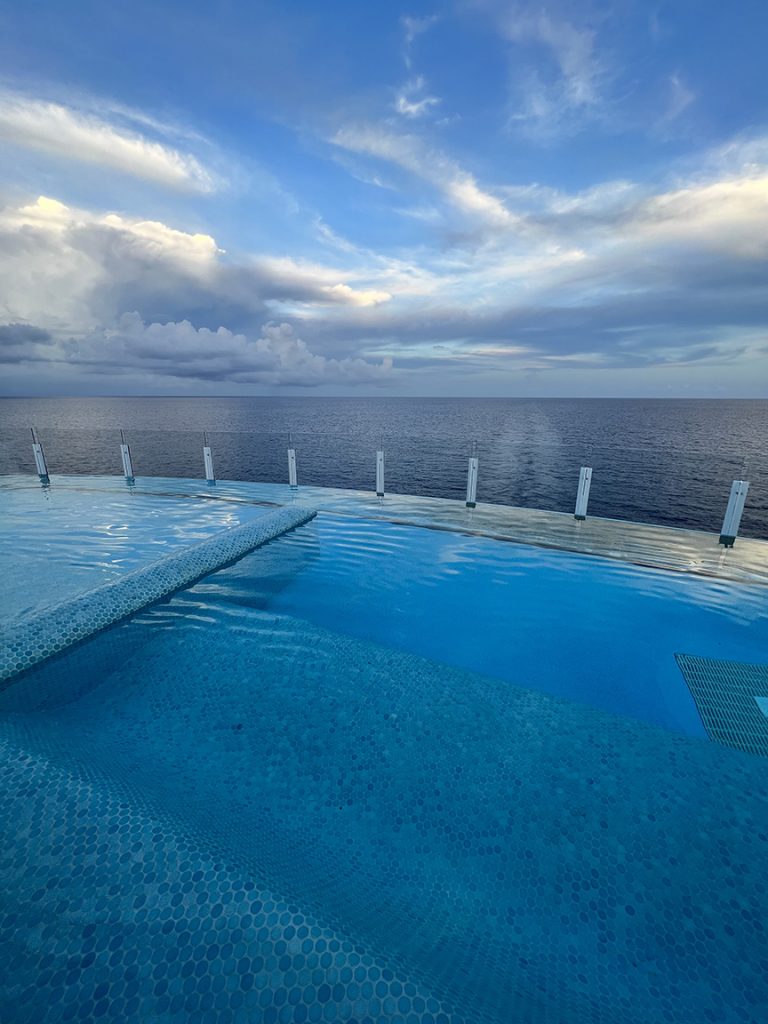 Speaking of grub, one of the biggest surprises on ANY Disney ship is how excellent the food is.  The Disney Wish is certainly no exception to that rule.  As someone who has sailed with Disney many times over the years; I was very pleased to be provided with all new menus and dining options. Three brand new rotational dining restaurants make their debut on The Disney Wish, 1923, Arendelle and Worlds of Marvel.

1923 is the Wish’s Triton’s (Disney Wonder), Lumiere’s (Disney Magic), Royal Palace (Disney Dream) and Royal Court (Disney Fantasy).  And 1923 meets all those expectations you anticipate from these similar dining locations.  Here, you’re in for a walk down memory lane in this casual but refined restaurant that pays homage to Walt Disney and the golden era of animation.

Arendelle is similar to Rapunzel’s (Disney Magic) and Tiana’s Place (Disney Wonder) in that it is a show style dinner, featuring dishes from the story’s hometown.  In this case, the menu is inspired by Nordic cuisine.  This was a pleasant surprise for me, as Frozen is undeniably one of my least favourite Disney animated feature films.  But the theming, talent and food were all very impressive.  And I assure you that you haven’t heard Let it Go, until you’ve heard it performed by Oaken and Kristoff! 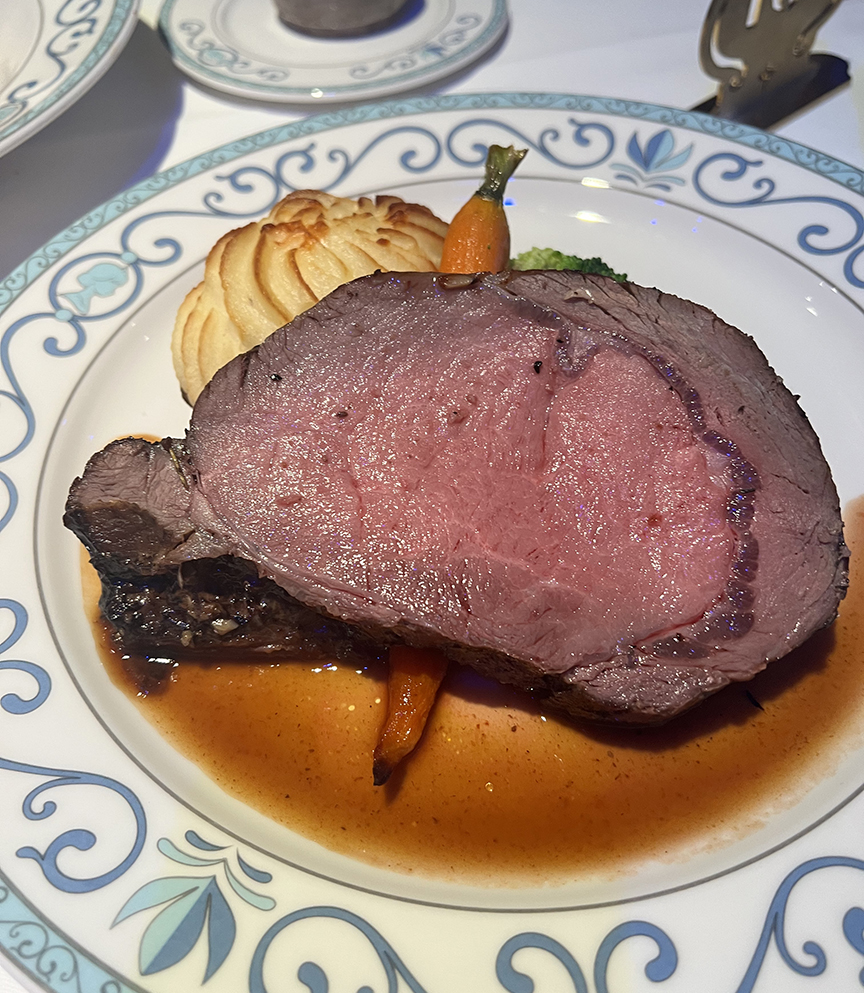 Worlds of Marvel features some of our friends from the Marvel Cinematic Universe, in a showcase of revolutionary quantum technology and world-class cuisine.  While a decent show, it is all pre-recorded video.  As a ship’s replacement to Animator’s Palette, I was hoping for something a little more interactive.  Asgardian Talk with Thor or seeing my drawing of Groot come to life would have been a vast improvement.  Regardless, I still laughed at Scott Lang’s shenanigans, enjoyed watching clips of some of my favourite movies and television shows during dinner and Ant-Man and Wasp making an in person appearance was a pleasant surprise.

One of the biggest draws of a Disney Cruise are the kid’s clubs and recreation.  Which makes sense because if Disney can’t keep little ones entertained, literally no other cruise line can.  The Oceaneers Club features Avengers, Star Wars, Princesses and more.  The Hero Zone offers indoor basketball, air hockey, ping pong and other such games.  And Edge and Vibe continue to be stand out areas for tweens and teens alike.  One of the best kept secrets of a Disney Cruise is that your children will be more interested in spending time in their spaces on the ship than they will be hanging out with mom and dad. 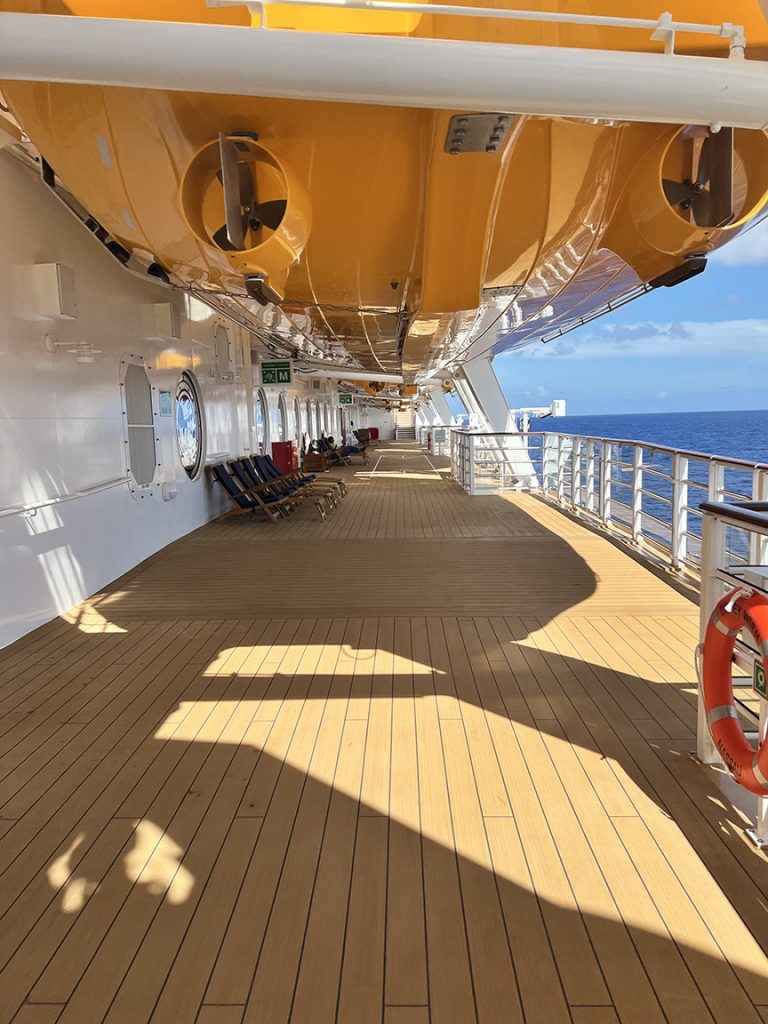 Due to legalities, every other cruise line is very limited to which music, characters and shows they can produce.  Disney on the other hand?  They own all of those said music, characters and shows, which means they can basically produce an endless line up of entertainment.  We were fortunate enough be given a sneak peak of Disney’s two new stage shows, Seas the Adventure and The Little Mermaid.  Both brought classic Disney stories to life in new ways.

I do miss the promenade deck (found on all previous four vessels) that is used for jogging as well as walking, with signs indicating the mileage.  For some unknown reason on the Wish, not only do you have to climb a set of stairs to continue along the promenade on deck 4, but you cannot make a full lap.  Instead, you reach a dead end and must double back.  On that note, unfortunately there are several dead ends to be found on The Disney Wish – so be prepared for this difference when exploring until you are more familiar with the layout of the ship.

Various bars, theatres and lounges are scattered throughout all decks.  Fans of the Star Wars franchise will find the drinks they are looking for at Hyperspace Lounge, you still have access to first run movies, but in TWO different theatres and at The Bayou, you can savour some beignets with your morning coffee! 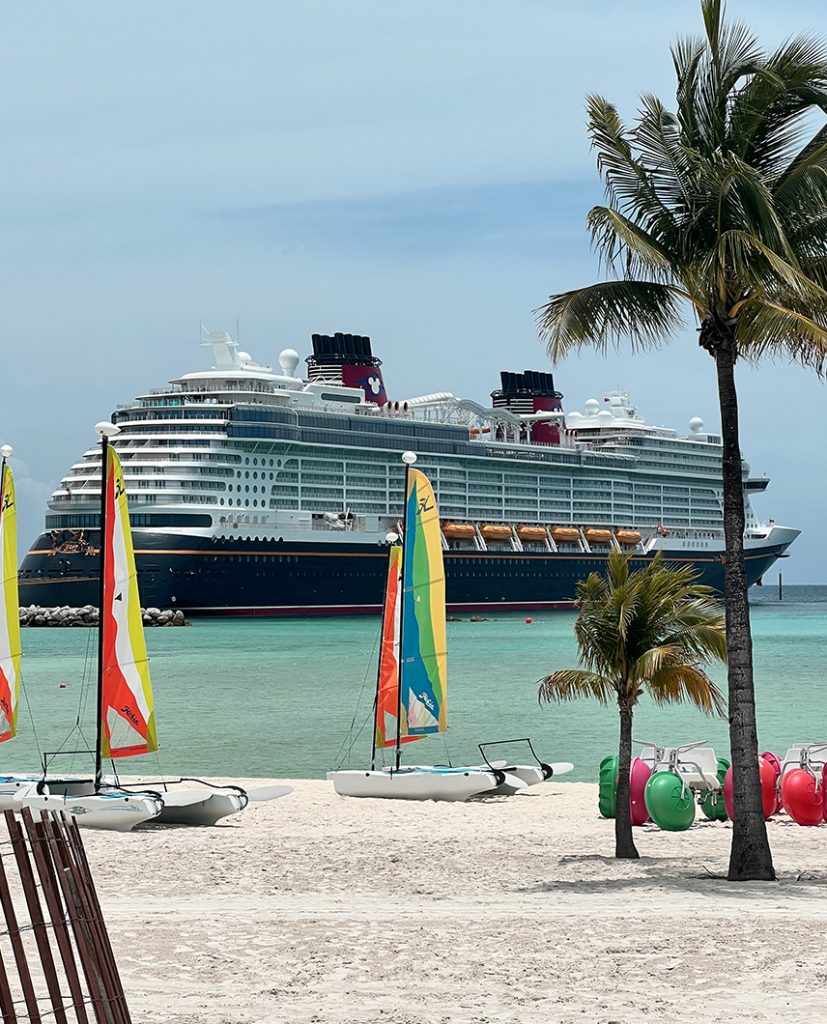 The Disney Wish celebrates nearly 100 years of storytelling.  It is an extension of the films and characters we know and love from Disney.  It brings fantastic worlds and beloved characters to life in new and innovative ways.

The only thing major disappointment from our time on The Disney Wish was that our sailing was only three nights long.  Without a doubt, three-and four-night sailings are simply far too short to really experience all that this new Castle on the Sea has to offer.  There were several areas of the ship that I simply didn’t have time to enjoy or explore.  Therefore, if you’re looking to really experience the wonder and enchantment of The Disney Wish, I highly recommend opting for a back-to-back sailing.  This way, you can enjoy a full seven nights aboard this beauty.  Besides, who doesn’t want to enjoy  TWO full days at Castaway Cay? SIGN. ME. UP!

Contact Fairytale Dreams & Destinations to Experience the Castle on the Sea Today!