I am part of the Harry Potter generation. I read the books as they came out, anxiously attended the midnight releases of the movies, and still will revisit the books and movies every July for Harry’s birthday. With the later inclusions of the play Harry Potter and the Cursed Child, the cinematic hits of Fantastic Beasts and Where to Find Them, and Wikipedia-esque Pottermore, there is a lot to explore for those who have fallen in love with J.K. Rowling’s magical universe. And what better to experience this world than with a visit to Diagon Alley and Hogsmeade at Universal Orlando! 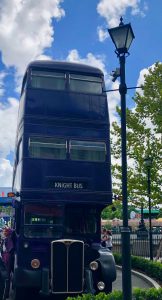 As you wind you way to the back portion of Universal Studios Florida, you may notice you are temporarily leaving sunny Florida, and find yourself in London, England! You’ll pass King’s Cross Station, but if you’re looking for Diagon Alley, don’t bother asking the Muggles, they won’t have a clue as to what you’re talking about (unless they are a witch or wizard in disguise). If you need some directions, I would chat with someone from the Knight Bus – you can’t miss them – a giant purple triple decker bus stands out!

If you haven’t brought your wand with you, worry not, you can tag along with your fellow witches and wizards as you enter…

Any trip to Diagon Alley means a stop in at Gringotts, while there are some stores that will accept Muggle currency, you can also convert your dollars to the wizarding Galleons, Sickles, and Knuts. 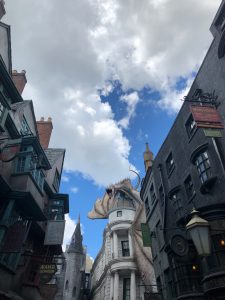 As you make your way through Diagon Alley, watch out for the Ukrainian Ironbelly above Gringotts – he’s been trapped for years and will occasionally blow fire to keep his captors away! Keep an open eye as you explore – there are many stores to visit – though some keep their doors closed due to a suspicion that Muggles have found their way into Diagon Alley.

After a spin around Diagon Alley – and Knockturn Alley if you’re so inclined – why not head over to Hogsmeade with your Park-to-Park ticket via the Hogwarts Express! 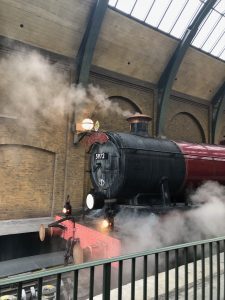 As you board at Platform 9 ¾, be prepared for your journey to Hogsmeade and Hogwarts. Harry was only 11 when he first made this trip, but witches, wizards, and Muggles who are younger will be just fine as well!

Once you head out of the train station, you are mere steps from entering Hogsmeade, the closest wizarding village to Hogwarts, School of Witchcraft and Wizardry. If you have a sweet tooth, make sure to visit Honeydukes – whether you are getting Bertie Botts Every Flavored Beans, or hoping for the missing card in your Chocolate Frog collection (made with 70% Croakoa), you can be sure to find a delicious treat! 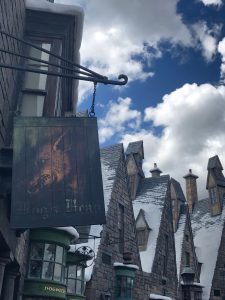 If you fancy a bite or a brew, you can visit the Hog’s Head. Sit in the back patio for a quieter experience – plus it’s got a great view of your next stop…

If you don’t feel up for Harry Potter and the Forbidden Journey, that’s no problem! There are often lines available just to wander through the castle. And be sure to head to the dungeons (or gift shop as Muggles refer to it) – there are a few rule breakers in detention trying to work off their punishments! Don’t forget to ask them how they ended up in trouble!

Remember, the Wizarding World of Harry Potter is located between two theme parks, and the only way to ride the Hogwarts Express is with a Park-to-Park ticket. And with the addition of the Universal Express Pass Unlimited, you can experience all of these rides multiple times with very little wait!

If you are visiting Orlando – whether you are staying onsite at Universal Orlando or offsite at Walt Disney World, doing a Disney Cruise Line sailing, experiencing all that Central Florida has to offer, or just passing through, be sure to ask your Vacation Specialist how to experience even more magic at Universal Orlando Resort!