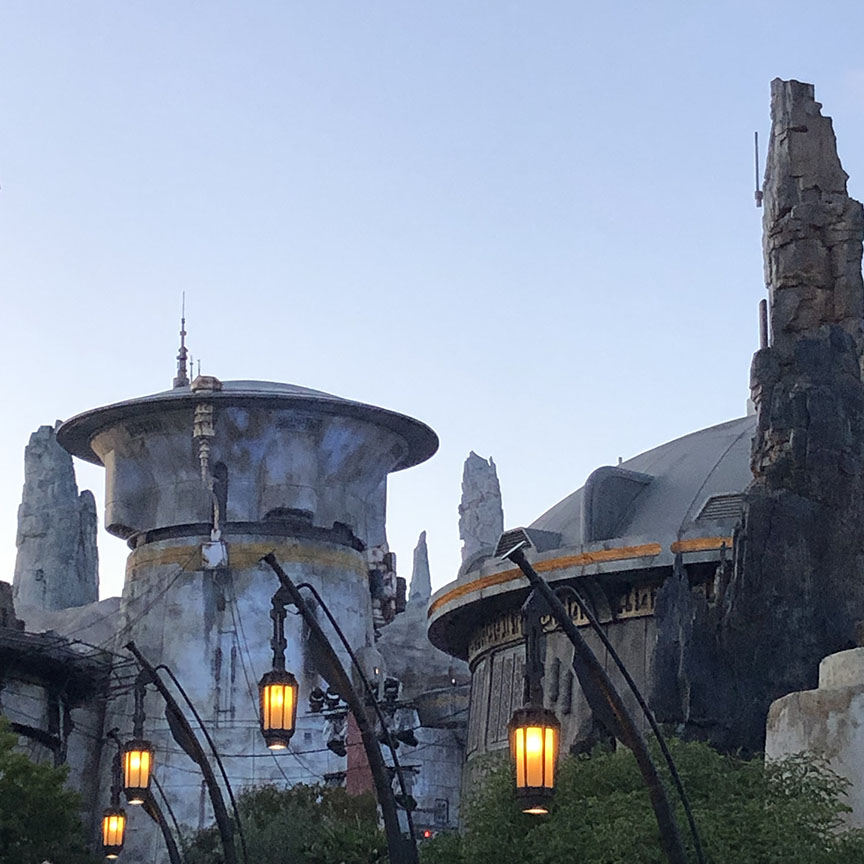 What I quickly learned is that Star Wars: Galaxy’s Edge was not just designed for young Padawans and those donning Resistance tattoos.  It was also designed for those who don’t know anything about Star Wars besides light up swords and cinnamon bun hair. Its immersive setting creates a magical moment for long time fans of the franchise, those experiencing the Force for the first time, and everyone in-between.

Star Wars: Galaxy’s Edge is set in the Black Spire Outpost on the planet of Batuu, located on the outer rim of the Star Wars galaxy.  It’s actually so impressive that it’s quite difficult to take in all the details at once. You’ll hear ships landing all around you, see Stormtroopers on patrol near the TIE fighter, and find Chewbacca and Rey near the forest as you make your way through the Resistance controlled village. None of the merchandise or dining locations will have names posted, which only adds to the authenticity that you are in a foreign place.  You’re definitely not in Disneyland anymore.

Located in the center of Black Spire Outpost you will find Oga’s Cantina, which is similar to the one from the original 1977 Star Wars movie.  Step inside to enjoy a cocktail, listen to a DJ droid spinning some tunes or chat with a bounty hunter who wants to talk about the credits you owe a space pirate.  Yes – willing visitors can have complete interactions with various Star Wars characters here. But be aware, there are quite a few scoundrels in the Galaxy – and you never know who might be reporting back to the First Order! 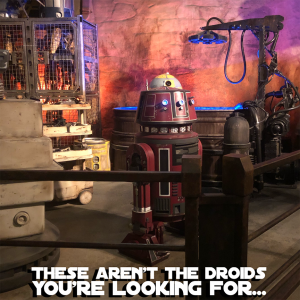 Have you always dreamed of building the droid you’ve been looking for?  Well now you can.  The Droid Depot is reminiscent of the scene in Star Wars – A New Hope when Luke first purchases R2-D2 and C3P0.  You will be able to pick up your own parts off of a moving conveyor belt and assemble a remote-controlled droid from scratch. Or perhaps you have something a little more elegant in mind? Something for a more civilized age? Why not head over to Savi’s Workshop – Handbuilt Lightsabers. However, the Gatherers who greet you will shut down any lightsaber talk. “We don’t want any trouble from the First Order,” they will remind you.  So they will explain what you’re interested in is an appointment to check out some “salvaged scrap metal” or “junk” instead.

We sampled the Pork Ribs, the Tip Yip chicken and more. And finished with popcorn from Kat Saka’s Kettle and other sweet treats.  The blue milk is a dairy free, slushy creamy drink that tasted like melted SweeTarts. The food was as good and unique as the Satu’li Canteen at Disney’s Animal Kingdom Theme Park. 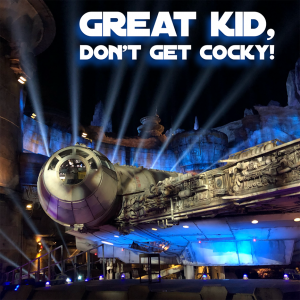 The central attraction is Millennium Falcon: Smugglers Run, located inside a replica of the fastest ship in the galaxy.  Seeing the Millennium Falcon in person is pretty incredible and a moment I won’t forget anytime soon.  It’s so incredibly authentic, that I kept expecting to see Han around every turn. 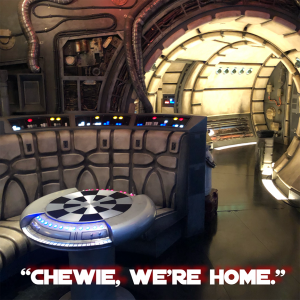 The level of interactivity is limited, but absolutely adds to the experience.  It was challenging the first time because I was busy trying to take in the visuals and do my job at the same time.  Expect warranted cheers from your crew when your ship makes the jump to light speed and don’t get cocky!

Taking a page from Toy Story Mania, you are awarded points on your flight at the end of your mission.  So of course the goal is to score higher each and every mission, creating a huge repeatability factor for many years to come. 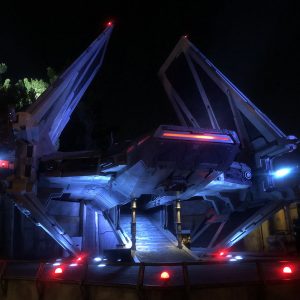 Batuu is a place we’ve never been to before, but it has been rooted so well into the Star Wars Universe, that it has a wonderful familiarity about it.  Disney has once again gone above and beyond and I can’t wait to experience it again.

So try the blue milk, join the Resistance and pilot the Falcon.  Visit Star Wars: Galaxy’s Edge.  It’s an amazing experience for one and all!

Star Wars: Galaxy’s Edge opens at the Disneyland Resort in California on May 31st, 2019 and on August 29th, 2019 at the Walt Disney World Resort in Florida.